Eurobike is one of the famous brands on the market today, thanks to their innovative designs and folding mechanisms. These bikes are lightweight and easy to carry with you.

Whether you are looking for a bike to run errands, commute, or just exploring the outdoors, Eurobike is the right choice for you. One of the top-performing rides that come from this brand is the Eurobike G4.

And in this Eurobike G4 folding mountain bike review, we will explore what this bike has to offer to its rider, so keep reading. 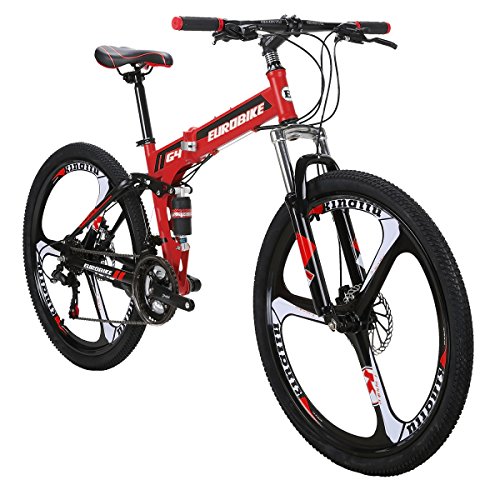 Who is Eurobike G4 Folding Mountain Bike made for?

This bike is lightweight, so it will be a top choice for anyone looking for a foldable design. Apart from that, this mountain bike has a 3-spoke design that looks relatively modern.

It also has dual suspension, so if you are looking for a comfortable ride while zipping through those bumpy ways, the G4 will perform very well.

It has robust steel construction and a good solid bike for commuting and using paved or unpaved paths. And above all its looks are pretty stylish.

The Eurobike G4 is an excellent mode of transportation no matter where you are looking to ride it. Regardless of the surface, this folding Eurobike G4 dual suspension will perform very well.

But what are the features that make this bike a great choice for all-purpose riding? To get to know all about that, let’s discuss some important technical details in this Eurobike folding mountain bike review. 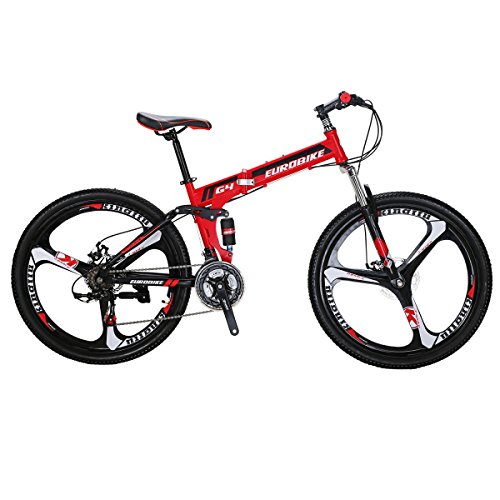 The first thing to talk about in this Eurobike folding bike G4 review is its design and frame. This mountain bike comes with a 17-inch solid steel frame. It means you will get good stability when riding these bikes. This robust frame can handle those bumps and scraps very well over time.

Your bike will come 85% assembled, and you will only need to install handlebars, pedals, front wheel, and seat. Of course, you will also have to air up the tires and all set to ride your G4.

The folding mechanism is convenient to use. Just make sure you oil it before you start using it so it can work smoothly. The folding system holds itself well during your ride, and you will never notice those vibrations, no matter how rough the terrain is. 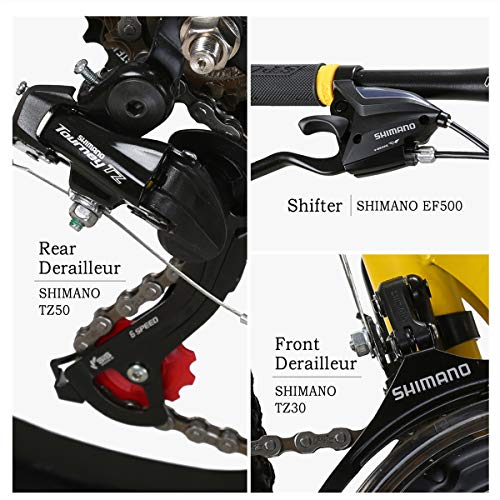 Next up is the shifting system and speeds in this Eurobike G4 folding bike review. The bike comes with 21 speeds with a configuration of 3×7. It means you will have various options to change your speeds and conveniently adjust according to your riding conditions.

Eurobike has used high-quality Shimano shifters to ride easily while maintaining your momentum. There is no doubt in quality because Shimano is the best company producing high-quality products for different bikes. 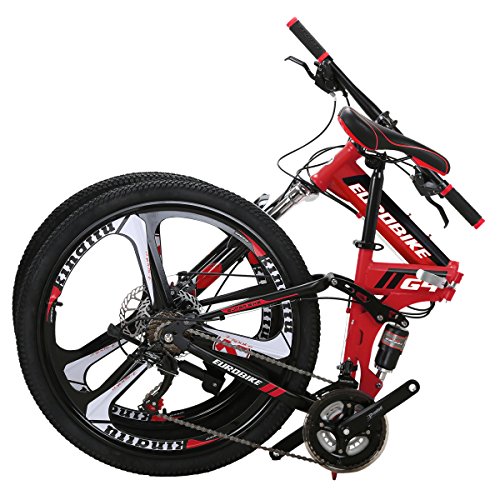 One of the best features of this mountain bike is its folding design. Eurobike has made sure that the folding mechanism of this bike is very smooth to operate.

In most cases folding mountain bikes are not that great, and you constantly feel that the bike will fall apart when you are constantly hitting those bumps and turns.

But this is not the case with Eurobike G4, thanks to its swift folding mechanism and robust steel construction. Its folded dimensions are 37.8-inch x 33.5-inch x 13.78-inch.

It means you can conveniently carry it on your back as it weighs around 41 pounds. However, this ride is not for skinny riders because they won’t feel comfortable carrying it for longer distances.

Next up is the suspension and braking system in this Eurobike folding mountain bike review. The suspension folding Eurobike G4 is dual. Therefore, your riding comfort will be top-notch as the suspension system on both ends can absorb bumps very well. It means you can comfortably ride your bike on uneven terrain for longer sessions without any body aches.

But that’s not all!

The Eurobike folding bike 26 also comes with a pair of disc brakes at both ends. Disc brakes are great for maximum stopping power at high speeds. You can conveniently control the speeds and ride your bike with more confidence. 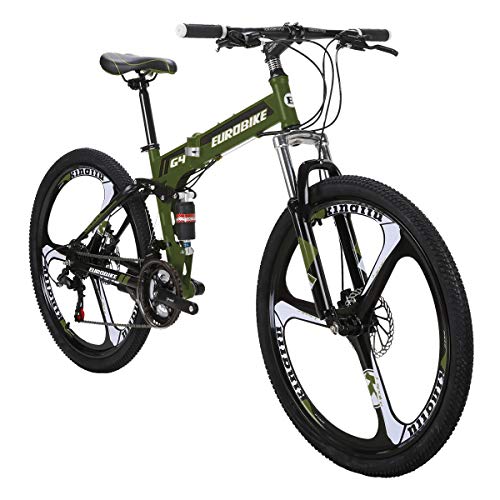 The 3-spoke design looks pretty stylish, and the wheels pair well with the 17-inch frame because this size of wheel is much better when it comes to steering. On the other hand, bigger wheels are better for speed.

The tires are 1.95-inch in width and are hard-wearing. Therefore, you will get plenty of grip from them.

Like all other Eurobikes, the G4 also comes 85% assembled. You will only have to fit the pedals, handlebars, front wheel, and seat.

Apart from that, you will also have to air up the tires, and everything is done. The entire assembly process will take around an hour, even if you don’t have much experience with assembly procedures.

If you are thinking about how to fold Eurobike G4, that’s not a big issue either. The bike comfortably folds up and opens. You can consult your Eurobike folding bike owners manual that comes with your purchase for more guidance.

What is the difference between Eurobike G4 Folding Mountain Bike, Eurobike G6, and Eurobike G7?

Eurobike has introduced some more models in the G Series as well. These include the G6 and the G7, with a few differences in design and some other features. Let’s briefly look at them in the following section of this Eurobike G4 folding mountain bike review. 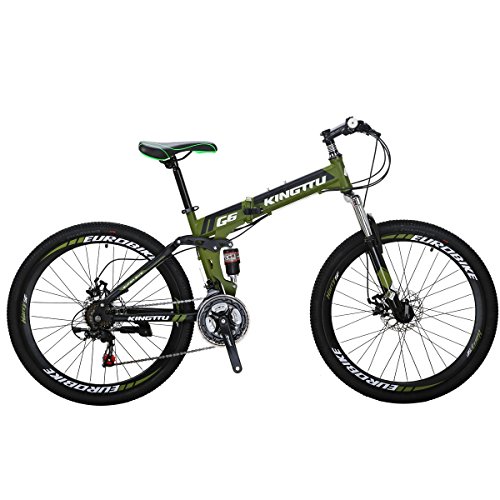 Apart from that, the Eurobike G6 is around a pound lighter than the G4, and it also has a weight limit of 310 lbs. The G4 comes with a weight limit of 325 lbs. So, the G4 can comfortably hold a bulkier rider as well. The rest of the features are similar in both these models. 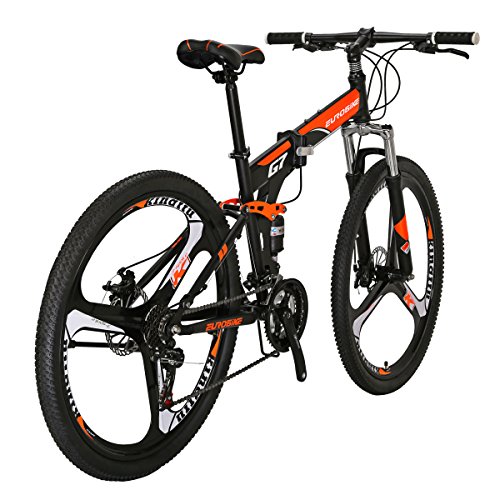 It means that this bike is suitable for taller riders ranging in height from 5’8″ to 6’3″. However, it’s still a bit lighter than the G4 weighing less than 41 pounds. All other features are the same between both these folding mountain bikes. 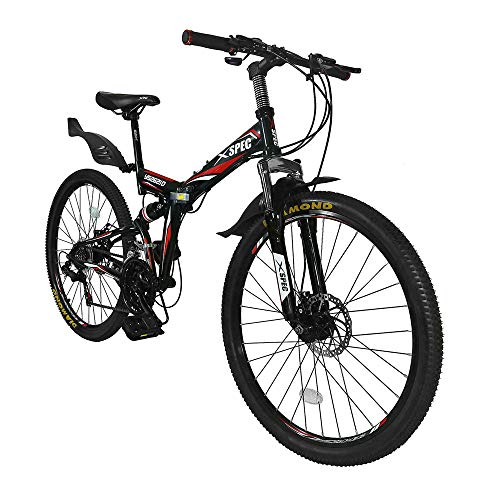 The Xspec folding mountain bike is a good alternative option to the Eurobike G4 that you will find on the market. There is no price difference between these two bikes, and the features are almost similar as well.

Of course, the Xspec has a more conventional folding design as compared to the G4. so if you are in favor of that, you should go for the Xspec. It also features 26-inch wheels as well as dual disc brakes and dual suspension.

However, the G4 is designed much more sturdily and comes with a max load capacity of 325 lbs which is only 220 lbs in Xspec. Despite this fact, the Xspec still weighs a pound more than the G4, which raises a few eyebrows.

The ride comfort is there, and the bike also has good stopping power, but it still comes with a low weight limit than the G4, and this is the second most significant difference between these two bikes, besides the looks.

Is there a Eurobike G4 Folding Mountain Bike model for women?

No, it’s a unisex model that is suitable for both men and women.

Yes, Eurobike is a good brand known for its quality bikes around the globe.

What's the dimension of the Eurobike G4 Folding Mountain Bike when folded and ready for a ride?

The Eurobike G4 has a maximum load capacity of 325 lbs.

The Eurobike G4 folding mountain bike can handle rough terrains, but still, it is not suitable for that.

Is the handlebar on Eurobike G4 Folding Mountain Bike adjustable?

No, the handlebar on the Eurobike G4 folding mountain bike is not adjustable.

After going through this Eurobike G4 folding mountain bike review, we can conclude this bike has nice 3-spoke design wheels. And with dual suspension, you will have a very comfortable ride. It has a reasonable price range too.

There are dual disc brakes present on these bikes to provide you with maximum stopping power. 26-inch wheels are a good choice for both men and women to ride. Moreover, this bike is available in four different colors too.